This mural in tribute to Yannick Nézet-Séguin (artistic director and principal conductor of the Orchestre Métropolitain) was created by artist MC Baldassari, and produced by MU in collaboration with the Orchestre Métropolitain. This work is the 27th in the collection of murals celebrating “Montreal’s Cultural Builders”, initiated in 2010 by MU, to highlight the invaluable contribution of the city’s creators from different artistic disciplines. Yannick Nézet-Séguin can be found alongside Jean Paul Riopelle, Leonard Cohen, Éva Circé-Côté, jazzmen Oscar Peterson and Olivier Jones, and many others.

The mural is located in the heart of the Ahuntsic-Cartierville borough, where he was born and built his first career at Saint-Isaac-Jogues elementary school. Montreal is his birthplace, but also where he received his musical training and – despite his posts in Philadelphia and New York – has always been his home base. His many accomplishments and recognition are a source of pride for all Montrealers. The work highlights the modern world of this exceptional cultural builder: playful, creative, energetic and organized at the same time. Through his posture, we feel his calm, his emotion, but also his know-how and his intensity. Straight from his heart, a colorful wave depicts a different and contemporary representation of classical music.

Born in France, MC BALDASSARI (MC for Marie-Clementine) moved to Montreal in 2007 to pursue her studies in Industrial Design. After graduating in 2010, she...
Learn More 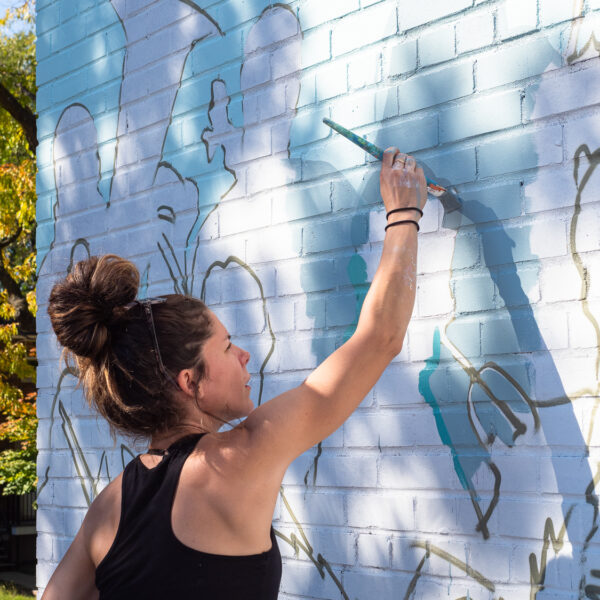