Produced by MU, this mural pays tribute to Montreal freethinker Éva Circé-Côté (1871-1949), founder, first librarian and curator of the Montreal Library, housed in the Monument-National in 1903; co-director of the first secular high school for girls, which was located just a stone’s throw from here; journalist, essayist, playwright, poet, musician. A feminist, Éva Circé-Côté has been a lifelong advocate of a progressive and inclusive society in which indifference to natives and immigrants would not exist. For more than forty years, she has worked for the emancipation of her people, contributing to the debates, making her readers and audiences aware of different issues and the importance of social reforms, including the secularization of institutions and free and compulsory education.

This work highlights the invaluable contribution that this passionate woman of letters and culture has left for Quebec in the fields of education and culture, but also in our path towards a more just society, free of racial, gender and religious prejudices. Created by artist Cyrielle Tremblay, this mural invites us to get to know Éva Circé-Côté by exposing her nuances and multiple facets.

A phrase that expresses her optimism, “To pass on a shiver of hope”, is displayed as an inspiring note. It is as if she is looking down on us to give us courage. We invite passers-by to reflect, to contemplate and to discover the author.

In this collage where different universes come together, we also salute the multitude of hats that Circé-Côté has worn throughout her life, both professionally and personally. In the front, we also find a pile of books with a ribbon, waiting to be opened and read. Above, flowers, as a symbol of the abundance of knowledge. On each slice, a nod from the artist to Circé-Côté: the smiling men (the pride of having the task of paying tribute to a woman who has done much for many social causes in Quebec), the flames (the conventions she invites to burn!) and her name, so that everyone can know her.

The work is part of the collection “Les bâtisseur-es culturels-les montréalais-es”, initiated by MU in 2010, aiming to highlight the invaluable contribution of the creators of the metropolis of various artistic disciplines. It was realized by the artist Cyrielle Tremblay, assisted by Julien Sicre.

This project was realized in collaboration with the Société de développement commercial (SDC) du Quartier latin.

Cyrielle Tremblay works in, with and from the public space. She constructs dreamlike universes where memory or poetry, humor or absurdity prevail. Between mural and...
Learn More 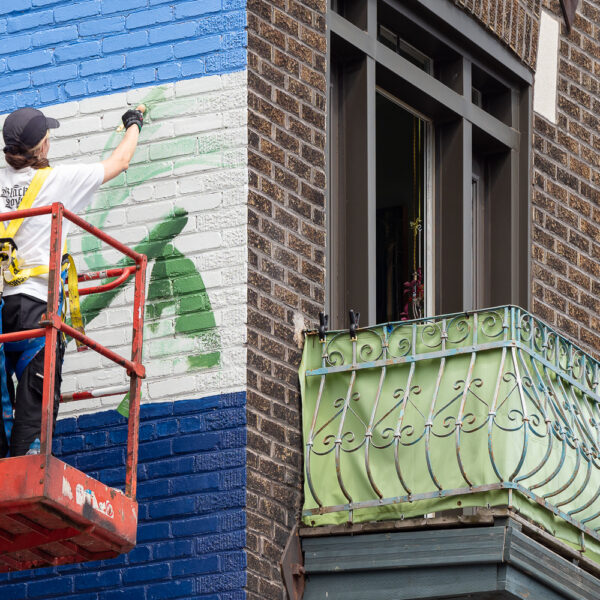 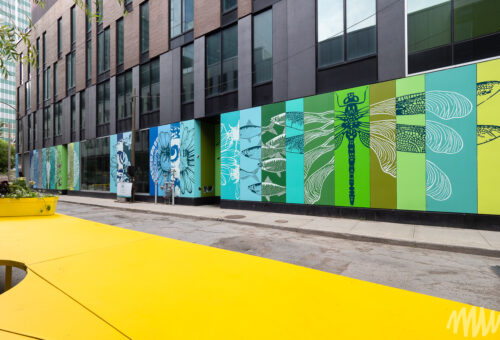 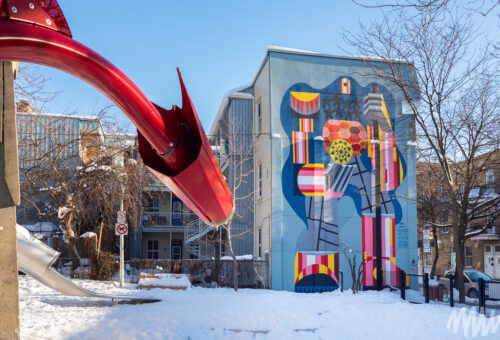